What God's doing in my life.

I live near Disneyland in California with my wife Gina. We married in 1965. I had a stormy childhood, watching lots of arguments in my home. I was a handful to raise too, since I was quite energetic and mischievous. All the way through high school I was involved in athletics and always trying to be the best at everything I did. I planned on being a successful businessman someday with lots of people working for me. But, no matter what I accomplished, it wasn't enough. Nothing really brought me satisfaction. I always needed a new challenge or I wasn't happy inside. 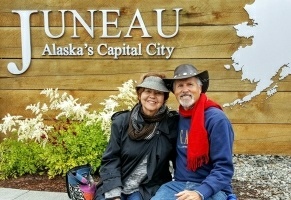 I just wanted to continue my self-centered lifestyle, even if it meant others were hurt in the process. Me first. That seemed to be my inner goal. By the age of 21 I wasn't really sure there was a God. In my heart I feared there must really be one, but if I admitted it, I knew I was accountable for my lifestyle. That didn't excite me much for certain!

So, I always felt "empty". Lonely too, since I didn't really have deep friendships. I started realizing it wasn't going to get any better and one evening, as I saw the wonderful stars, I thought. "Maybe there IS a God!" That really worried me, as I said, because I didn't really think I'd be in very good shape if I had to meet my maker any too soon!

While traveling with a college tennis team, a friend pointed out to me that God loved me and proved it by sending His Son Jesus Christ to earth. The God-Man. He said all other great religious leaders are 6 feet under the earth. Not Jesus. Hundreds of eyewitnesses saw Him months later on 6 different occasions. Even a crowd of 500 saw Him. Certainly not mass hypnotism! He said that his original followers and thousands since have died by choice rather than deny that truth. One doesn't die for a lie he argued.

My friend said God's Plan for me couldn't be known because I, like all humans live a life choosing selfishness, not God and Love for mankind.

I had to admit that was totally true in my case.

He said the Bible said that if I died in that condition, I would be separated, as on earth, from God forever. No relationships. None at all. That would be Hell.

But, He pointed out the Bible says FORGIVENESS is only available by trusting in the paid penalty (Death), by Jesus Christ. Romans 6:23 says "The wages of sin is death.." Separation from the body is physical death. Separation from God is spiritual death as described above. Also, he said.The Bible says, "It is appointed to man to die ONCE, and after this, the judgment."

Finally, he said I couldn't just believe what the Bible said, I needed to trust it too.like putting all my weight on a chair, trusting it would hold me. But, I needed to sit on it. He said Jesus was knocking on my heart to become my Lord.

That didn't excite me much at all. I said "No Thank You!" So, I lived a terribly rotten life for about another year.

My roommate, Rich Schmidt, prayed I wouldn't be able to go to sleep, thinking about my eternal future. So, God answered that prayer. I kept him up for hours, regularly peppering him with all my questions.

I got deeper into sinful living for months. One day, after hours of a lump in my throat, (I didn't know why I was feeling this way), I pulled over to the side of the road and prayed to God. "God, if what Bob said last year is true about Jesus Christ, I want to believe it."

I experienced the 4th truth Bob had told me from the Bible. I had kind of believed him the first time - Jesus Christ loved, died, rose and His victory over death could make it possible for me to experience God's plan, receive forgiveness, and live with God forever (eternal life).

BUT, I had only believed it with my mind, not my heart. Now, I wanted FORGIVENESS. I simply gave my life to the Creator of the universe to do with as He wished. I WANTED TO KNOW GOD PERSONALLY.

I was forgiven! "If you confess with your mouth Jesus as Lord and believe in your heart that God has raised Him from the dead, you shall be saved." Romans 10:9,10

Guess what? I had a peace in my heart. I realized I was accepted by God just as I was (not too great a deal for Him, I thought). God gave me a reason to live. I saw everything I did as a way to serve Him. I wanted deep in my heart to stop living selfishly and to help others.

God gave me a great woman, taught us to rely on Him as we learned to grow in our marriage. (It was tough at first!) He gave us three kids who have grown up to love God. He allowed me to have a full time job being a youth minister, and now to have a business helping people learn about the Bible!

Finally, I have complete confidence that if I died this very minute, I'd be in heaven with the Lord - not because of how I've lived my life, but because Jesus paid for all my sins. I'm forgiven!

Is this what you want?"

Thanks for taking the time to read this!